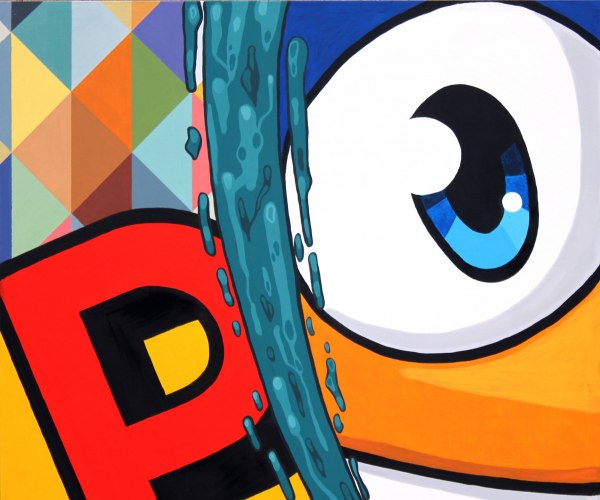 Pao Post Pao “Dirt Roads for the Post-Lost Ones"

The gallery Il Castello - Modern and Contemporary Art in Milan is delighted to present 18 artworks of Paolo Bordino (Pao), who is one of leading figures in the Street Art in Italy.

He was born in 1977 in Milan, where he lives and works today. In 2000 he performed for the very first time as a street artist. This is how colorful penguins on cement bollards were born, and other works, such as: cans of Pao Cola and Campbell's soup painted on the walls of public bathrooms, smiled billboard balls, dolphins and sharks, pelicans, daisies , etc. In 2007, after the exhibition "Street Art Sweet Art" placed in PAC - Pavilion of Contemporary Art in Mila, Pao begun working with canvas and fiberglass three-dimensional supports. He is developing new art-paths through experiments with materials, forward-looking studies, visual distortions and curved geometries. Pao tries to overcome the two-dimensionality of the canvas, and in the same time, the three-dimensionality of our world. The growing public attention to his work, which distinctive characteristics remain the same, let him to exhibit his artworks in public spaces, museums and private galleries in Italy and abroad. He exhibited his works in various art exhibition spots, including the Contemporary Art Pavilion in Milan, The Milan Triennial, the Venice Biennale.

In the catalouge which was printed for this occasion we can read: "(...)Now, let’s talk about the exhibition "Post-Pao", as this catalog is a part of it. Its subtitle should be like this: "Post-Truth, Post to Facebook and Lost Places." I think that it's a good summary of all concepts that Pao is expressing in his artworks. We find the post-truth as the merger between Communism and Capitalism of the post-Mao China in paintings such as "KPCC", which combines the stylized face of a colonel Harland Sanders, the symbol of Kentucky Fried Chicken, and the stylized face of Marx, the symbol of the Soviet and Chinese communism. So this is how we find "posts" everywhere, consumed and produced all around the world, Facebook’s ones and those which we see in Pao’s paintings, i.e. "Like For Your Right", in which the clenched fist of a fighter is replaced by a thumb’s-up, an icon of the popular social network. Finally, there are Lost Places. Those that cannot be found via Google Maps or GPS. Those, which can be reached only by traveling on dirt and long roads which nobody wants to choose as they seem to lead to nowhere, but still, they are the only way to discover something new and wonder about the world around us." (Jacopo Perfetti).